Gary Joseph Cieradkowski
I run my own design and illustration shop in Northern Kentucky. To say I am a big baseball fan would be an understatement. When my Father died suddenly this past fall, I lost my baseball pal. No longer did I have someone to talk about obscure players and trade baseball trivia with. I started this blog and card set as a way of continuing that friendship and sharing it with others. Check out my design website: www.cieradkowskidesign.com

My brother called me yesterday to ask me about Jackie Robinson. See, Jay's a public middle school teacher in Jersey City and he was having his class read a novel that mentions Robinson and the Brooklyn Dodgers throughout the text. That the book has Robinson and the Dodgers in it has a deeper local connection - in Journal Square downtown there is a giant bronze statue of Robinson reaching skyward, a silent but striking tribute to the day in 1946 when he stepped onto the field in Jersey City's Roosevelt Stadium to become the first black man to play organized baseball in the 20th century.
Being a big Robinson admirer I probably told my brother much more than he desired to know about his first season in the majors but I didn't care, I was on a roll talking baseball. One thing I told him was that despite the way coverage has been skewed the past couple of years portraying him as a lone-crusader, Robinson had quite a few solid and courageous teammates who helped him through that most difficult year. Manager Leo Durocher, for example, single-handedly squashed a budding team mutiny by telling the players that all he cared about was the Dodgers winning and if the white players didn't hustle and win he had no problem replacing them with blacks who could. He told them that more black players were following Robinson and they had better get used to the idea. As for the anti-Robinson petition that was supposedly circulating, the players could "wipe their ass with it." To cap it off he declared: "I don't care if he is yellow or black or has stripes like a fucking zebra. I'm his manager and I say he plays."
There was one other player that came to mind when I was telling that Durocher story to my brother. While Durocher showed his support with tough-guy talk, this one particular teammate of Robinson's showed his with a silent but far-reaching gesture.

Before he was known as "The Little Colonel" and "The Captain", they called him "Pee Wee". The nickname evokes a vision of a diminutive fella, but in fact, Pee Wee Reese was not small at all, 5'-10", and 160lbs, average size for ballplayer during the era he played in. No, the nickname "Pee Wee" came from being a champion marbles player as a kid and a "peewee" is what players call a 1/2" sized marble. Reese was such a good player that he was runner-up in a city-wide peewee marbles championship held by his hometown Louisville Courier-Journal newspaper.

Like I said earlier, Reese wasn't small by any means, but in high school he was skinny and frail looking and this kept him from playing much on his high school baseball team. His love of the game was satisfied by playing for his his church team, New Covenant Presbyterian. With pro ball the farthest thing from his mind, Reese took an apprenticeship with the local telephone company where the constant climbing of poles built up his slight body adding strength to his frame. When his church team won the 1937 Louisville City League Championship, things began to change quickly for Reese.

The Louisville Colonels were the local minor league team and a scout made sure he snatched up the New Covenant shortstop after the series. For a $200 bonus and a promise of $150 a month, Pee Wee Reese became a professional ballplayer.

The new kid did pretty decent his first season, batting .277. Reese beat out former major leaguer Ray French to become the Colonels' starting shortstop and although he was just average at the position, manager Bert Niehoff could tell he just needed to play in order to hone his natural skills. He was fleet afoot and in 24 stealing attempts was successful in 23 of them. Being from Louisville didn't hurt and the good-natured Reese quickly became the hometown's favorite player.

The Colonels played in the American Association which was equivalent to today's AAA classification. In 1938 the Louisville team was what was termed "unaffiliated" which meant that it was under no working agreement with any major league club. This left the ownership open to offers to buy their players from a variety of different teams instead of having to sell to just one. At the end of the season a group of businessmen bought the Louisville club. The identity of the members of the group which made the purchase was intentionally kept ambiguous but it eventually became known that Tom Yawkey, owner of the Red Sox was behind it. The reason for the purchase was the team's shortstop, Pee Wee Reese. Yawkey wanted to make sure no other club sunk their teeth into this kid which his scouts said had the makings of a great major league shortstop.

Reese was pretty much guaranteed a place on the Red Sox except for one thing - their player-manager Joe Cronin, who happened to play that very same position as the kid from Louisville. Cronin was notoriously sub-par in the field and sensitive as hell about it. The Red Sox had a decent ballclub at the time, having clawed their was up from being a perennial second-division team. With young players like Bobby Doerr and Ted Williams mixed with veterans Jimmie Foxx and Lefty Grove, the Red Sox were beginning to gain back ground and respectability in the league. The only problem was that manager Cronin was terrified of being beaten out of his shortstop job by a younger player. While other Boston scouts reported the merits of the budding superstar in Louisville, Cronin told Yawkey that Reese was just too small and sickly-looking to play in the bigs. Boston's owner listened to his manager and tried to recoup his Louisville investment by selling Reese to the Brooklyn Dodgers for $35,000.

At the time of the purchase, the Red Sox were in second place behind the mighty New York Yankees and looked like the next big powerhouse of the American League. Now suddenly Reese found himself headed not for a first-rate team but to the joke of the National League, the Brooklyn Dodgers.

Like the Red Sox, Brooklyn had been the league's bottom feeder for decades. The difference was Boston's owner Tom Yawkey spent money on his players with reckless abandon and the Red Sox had turned their fortunes around. Brooklyn on the other hand had just recently avoided bankruptcy and their record was anything but encouraging. In '38 the team finished in 7th place, 18 1/2 games out and in '39 12 1/2 games back in 3rd place. The sporting papers were chock full of the stories about the team's incompetence - 3 guys winding up on the same base, outfielders being hit on the head with the ball and crazed fans driving the opposing team's players as well as the home team's mad with their incessant heckling.

No, Brooklyn was as far away from Boston as you could get. When informed by a sportswriter that Louisville's star player was soon to be a Dodger, Reese instinctively replied: "Oh - not Brooklyn!"

Of course Pee Wee Reese went on to become one of the Dodgers' most popular and successful players, the anchor that held together 2 generations of great Brooklyn teams in the 1940's and 50's. His leadership both on the field and in the clubhouse kept the Dodgers cool and collected during some of the most competitive pennant races in baseball history. But beyond that, it was Reese that became the example for his fellow ballplayers when it came time to integrate the team in 1947. When other players chose to shy away from making any statement about Jackie Robinson's presence on the team, it was Reese, a southerner by birth, who had the courage to stand by Robinson's side during that challenging 1947 season.

Perhaps no story says it better than the often repeated one about a May afternoon at Crosley Field in Cincinnati. There had been KKK death threats before the game. A sniper was supposedly poised to take down Robinson if he dared to take the field. The capacity crowd was extremely hostile against Jackie's presence on the field and the game hadn't even started yet. As the Dodgers took batting practice the Reds players began shouting racial slurs from their dugout. In this seething cauldron of hatred, Pee Wee Reese walked over to the solitary Robinson and casually put his arm around Jackie's shoulder in a show of friendship. Legend has it the stadium responded in a single, collective gasp. With that single gesture, Reese told the world that Robinson was accepted and from here on in, they had better get used to it.

Talking to Roger Kahn, author of the classic Brooklyn Dodgers book "The Boys of Summer", Reese said: "I was just trying to make the world a little bit better. That's what you're supposed to do with your life, isn't it?"

SABR, The Society of American Baseball Researchers has compiled a comprehensive book on the 1947 Brooklyn Dodgers called "The Team That Changed Baseball And America" in which every single player who wore a Brooklyn jersey that year has their own well-researched biography. While as a whole it tells the complete story of that fabled team, each individual 3-4 page biography tells the story of one man's journey to play professional baseball. If my word holds any water when it comes to suggesting reading materials, let it be known that I highly recommend this gem...

Posted by Gary Joseph Cieradkowski at 5:16 AM No comments: 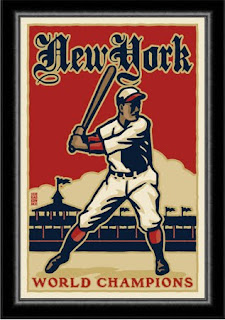 For the rest of the month of April, the company who prints my posters has offered me a little discount which I'm passing down to anyone who would like to own one of my art posters. There are quite a few different themes and styles and you can see most of them HERE. I also have a store on ETSY which you can see even more HERE. The limited time pricing is for 16x24" size prints for $70 postage included. Payment is through Paypal and you can order a poster by clicking on the BUY IT NOW bar below, just REMEMBER TO WRITE IN THE NAME OF THE POSTER YOU WANT...